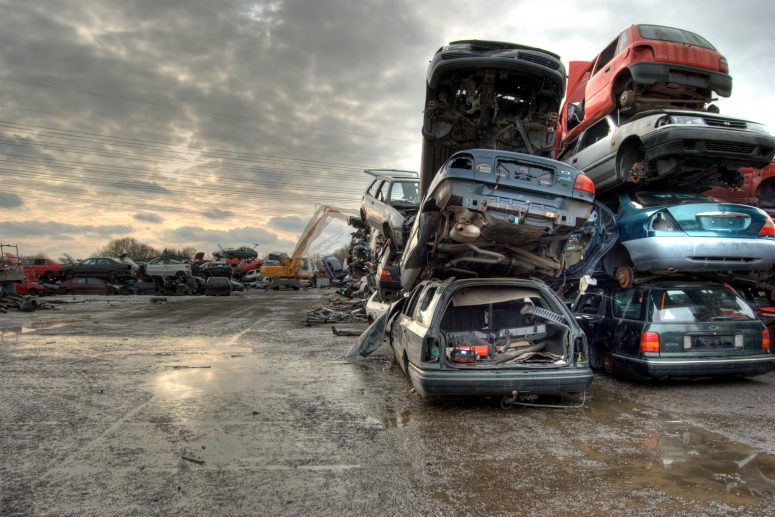 If you’re a motor-head, the last place you need to pay a visit is the scrapyard that has a crusher and any other vehicle recycling equipment in operation. Call it what you want, but watching your cargo from that set of wheels that took you anywhere you wanted in a few turns of the wheel to a box of metal small enough to fit into a similar car can have a grown man in tears. Nonetheless, we’ll take you through the steps that scrap car removal companies take when recycling a car. For the sake of the light-hearted (hardcore car enthusiasts), we’ll save you the gore details. Or are we?

The part that won’t bring too many tears to your eyes is when your car is towed away. This can happen in two ways; you either get paid for the scrap and any salvageable parts, or you give it away willy-nilly since old cars turn into health hazards at some point. Either way, having decided that a towing car should haul your vehicle away is the first stage of the car recycling process. There are finer details to the process of towing the car, you can find out more about these in other discussions.

Seldom will a car be totally unusable, even when involved in the kinds of accidents that ‘total’ it. A piece or two may still be in working order, to the end that someone might be on the hunt for them in the near future. Although used, these parts will add some usage time and mileage to vehicles still on the road. During the process of removing such items (windshields, rims, steering wheels, and such), the used oil and now rust-contaminated fule that the car may still have, are carefully drained and discarded in ways that will not damage the environment. It would be pointless if these were allowed to spill out in the next step.

Related article: Scrapping vs Salvaging: What to do with Scrap Cars in Toronto

Now ready for the extraction of metal, the car is lifted either by heavy magnets or mechanical arms and inserted into the crusher. In simple terms, a crusher is what you get when a cavity holds the car in place as 2400 psi of pressure from all sides reduces the car into a cube of metal. The stuff of nightmares really. It is at this stage that the make and model (and how much you paid for it) of a car are of no importance anymore.

The treatment that a rust bucket from a handful of decades ago gets from the crusher is the very same that last year’s Lamborghini will get. The merciless machine is just the start of a series of mechanical breakdowns that breathe new life into any unfortunate vehicle that lands into its mouth (that cavity from before).

In their now cubic form, the vehicles are placed onto a moving belt that feeds a shredder. Just the name should be too much detail into what this machine does. In conjunction with a cutter, the now lumps of used-to-be-cars are broken down into smaller pieces of metal. We’d swear one can hear the screams and cries as the metal rips apart and any other air pockets are removed from the scrap as they drown down the shredder’s neck.

The output from this process is a finer serving of metal, from which it is near impossible to tell which part of the vehicle is which. Only some semblance of color remains to distinguish which vehicle is the source of a corresponding piece of metal.

Related article: How to Get the Most Money Out of Your Scrap Car (in Toronto)

To separate the metal from the rubber and other materials (cloth, mats, and cushions), huge drums of magnets roll over the metal. This process ends the metal collection part, leaving heaps of valuable metals ready to be used again. On the other side of this mine of wealth is a lot of stuff that is often transported to decommissioned open cast mining sites to be used as landfill material.

A lot of car removal companies are involved in this process to step 2, leaving more specialized plants to take on the more industrious steps that spew out metal for reuse. If it is any consolation, some of the metal recovered from this rather unsightly process goes back into the making of cars. Making it analogous to a rather brutal rebirth process, through which your sacrifice will give the owner of a new vehicle comparable joy and adventure. All worth it when you consider the number of natural habitats that would have otherwise been destroyed to get fresh metals to build cars.